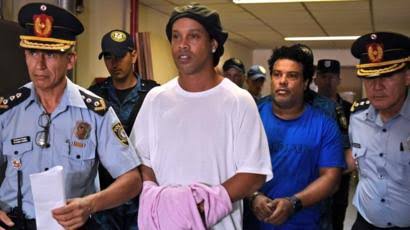 Brazil and Barcelona legend, Ronaldinho has been arrested in Paraguay after entering the country with a fake passport. On Wednesday at Asuncion, Police officers questioned Ronaldinho and his brother Roberto De Assis who is also his business manager over their passports and they were both summoned to court. 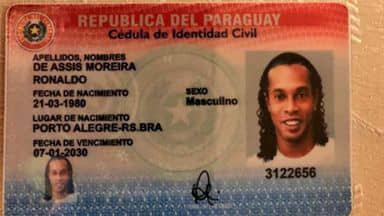 Ronaldinho who claimed they came into Paraguay for business purpose said the passport was given to him as a gift by a Brazilian businessman, Willondes Sousa Liria who has also been jailed.

His lawyer said the footballer was tricked and he assumed the passport was of an honorary type of document with no real value, and he gave it to an official without thinking when he arrived at Paraguay as it was the first thing he got out of his bag.

Ronaldinho’s original passport was seized last year because of a lawsuit over the construction of an illegal fishing platform on a lake in a conservation area, however, the Paraguay prosecutors have confirmed that Ronaldinho’s passport had been returned to him and he used it in leaving Brazil with a flight from Sao Paulo.

He could face up to six months in prison if he’s unable to clear himself.