Firsts Baba Isa, an Abuja based lawyer has debunked claims by his colleague that 4000 divorce applications have already been filed this year in Abuja.

Recall that another Abuja lawyer, Annebrefa tweeted that they currently had 4000 divorce applications and the marriages were less than a year. 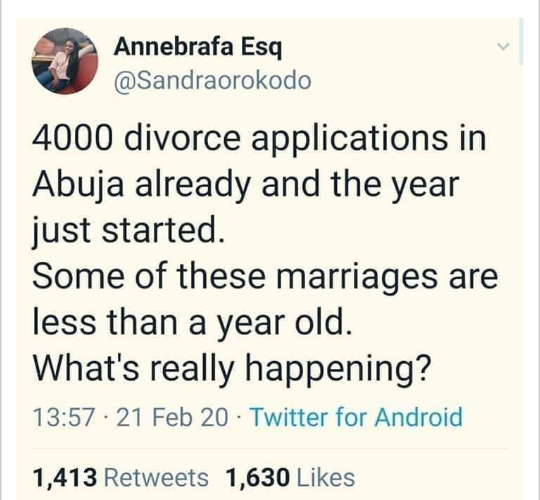 “This is a lie!
Immediately I saw this tweet, I knew it was a big fat lie. But I still called the appropriate authorities to confirm, it is a lie from the pit of hell.

I don’t know why anyone will put up such a lie out there. But if the purpose is to get people to bash marriage and lose faith in the institution, I think they have succeeded, a lot; see how a massive lie has gone viral. Even those who should know better have been broadcasting this falsehood.

I’m a core litigation lawyer. Family law is one of my practice areas and I handle quite a number of divorce, custody, adoption, maintenance, etc cases. I’m based in Abuja. Bottomline? I know what I’m talking about.

The total number of cases (all cases o, not just divorce) filed at the FCT High Court since the beginning of 2020 is not even up to 2000, yet. So where did she get her figures from? And note that the High Court is the Court that has jurisdiction to entertain divorce proceedings for marriages contracted under the Act (Court Marriage).

Though other inferior courts like the Customary Court have jurisdiction to entertain divorce proceedings for marriages contracted traditionally, but only a negligible number go there for divorce proceedings. So where did she get her 4000 figure?

How many couples dey this our Abuja sef?
Another crazy angle of this lie is that some of these marriages are less than a year old. In law, you can’t bring a divorce proceeding to dissolve a marriage that is less than 2 years old, unless you satisfy some stringent conditions to get the permission of the court.

And less-than-a-year-old marriages have satisfied these conditions and gotten the permission of court to commence divorcé proceedings in two months? Mtcheew.
Na wa o.
Now that it has been proven that Aunty Madam was lying, oya, make una follow share this post o.
– By Firsts Baba Isa (FBI)” 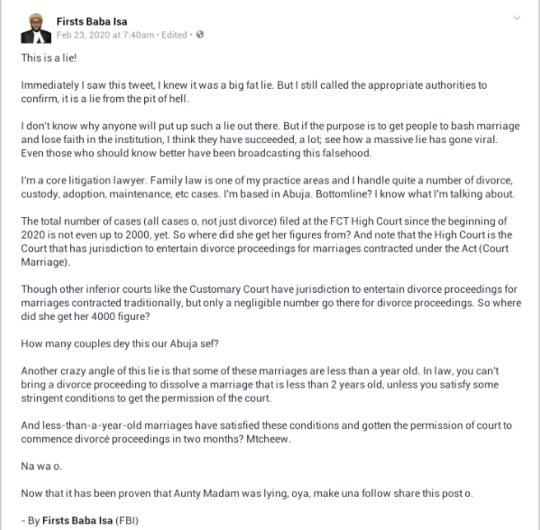 READ MORE: I AM NOT PART OF IHEDIOHA’S REMOVAL