BBnaija Level Up Housemate, Diana shunned Giddyfia after he apologized for gossiping about her.

It could be recalled that on Tuesday, August 2, the duo had a bit of misunderstanding, over what Giddyfia said about Diana.

Giddyfia had told fellow Housemates that Diana is his type of woman and probably her crush in Biggie’s House.He also said many other things about the reality star.

Diana, who had once told Giddy that she took him as her younger brother in Biggie’s House, wasn’t happy when she got the information about them and this led to her putting up some attitude against him. 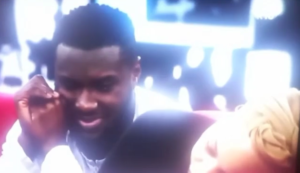 Giddyfia who felt guilty for gossiping behind her back, approached Diana while she was sitting in the lounge. He went on to ask for forgiveness.

However, Diana, who was still pissed, didn’t give Giddy the audience to completely express himself.

“I want you to know from the bottom of my heart that I will never do anything to hurt you,” Giddy told Diana and she responded saying, “Keep your saliva for the task tomorrow”.

Hurt by her response, Giddyfia bent down over the couch like he wanted to shed tears.

He later left the lounge feeling moody and unsatisfied with Diana’s response.

ALSO READ: “So You Can Talk” – Davido Express Shock As Babymama, Chioma Rowland Influences For A Big Brand