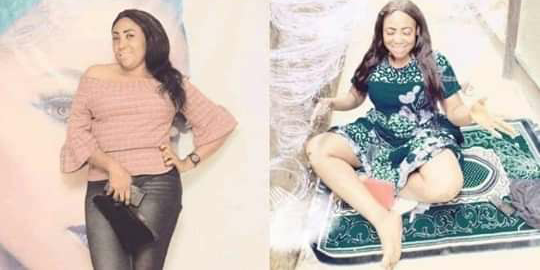 A certain Nigerian lady has recounted how she fell into coma for six months after her ex boyfriend ran away with the N15 million loan she collected for him out of love.

Not only did he run away with the N15 million loans he collected from him, she also sold her dad’s land, her personal car and virtually all her belongings for him.

The lady revealed that after the incident, she fell into complete coma for 6 months at Lagos Univerity teaching hospital (LUTH).

“I collected loan of 15million for my ex, sold my dad’s land, my personal car and virtually all my belongings…A story I will never forget in my life all bcoz of love. I was in COMA at LUTH for complete 6 months, infact I thank God for my life.

I was in love then cos he was the one that got me deflowered. I never knew his intentions was deadly. It was a pure foolishness and gullible act but I thank God for my life today.

He called me around 4pm on that day,that I should see him,that its urgent,then I left what I was doing,drove straight to his house,then he knelt down and started crying,showed me some business documents related to alluminium materials, crying profusely

I have not seen him till date. December 17th will be the last month of the loan… I have evidences…not a joke ooo”

Nigerian lady, Mercedes Ekwutosim Okwukogu has gone down memory lane to recount how her marriage crashed few years ago after she met and married a chronic lying man she met on Facebook.

According to her, she got into a relationship with his man two months after she met and chatted him on the popular social media network, facebook.

She revealed her jobless boyfriend, Henry (now her ex-husband) made her believe he lost his job because some persons in his workplace who didn’t like him set him up with the company.

Lady Mercedes noted that her now estranged husband began talking marriage with her 9 months into their relationship which he placed a caveat that he would only marry her when he’s financially buoyant enough to do so.

The almost 34-year-old lady then assured him that they both got each other’s back and would join hands with him to ensure their marriage held.

Writing further, she revealed that she had to give him N500k to enable him foot bills that came with the marriage list her people gave him, but to her greatest surprise, he brought incomplete items and when she confronted him, he refused telling her what happened to the money.

To save herself the shame, she gave her younger brother money to make sure the items were complete.

Mercedes also noted that before their white wedding which was slated for a latter day after they had their traditional marriage, they needed to move into a bigger house which she paid for.

Mercedes began smelling a rat when he cooked up a story of someone threatening to arrest him on their wedding day if he doesn’t clear his debt which she gave him money to pay the man he’s owing himself so it doesn’t appear to outsiders like she’s the bread winner.

But according to her, her now ex-husband never paid up that debt and she had to pay to save herself the embarrassment.

She recounted how her ex-husband lied about virtually everything including his actual age, but she said she tolerated everything until it got to a stage she could no longer bear the lies.

“He made me sell all my Gold and also took loan to set up an eatery for him because he was a great cook” she complained further.

However, she had to file for a divorce when

noticed he was deliberately denying her sex saying he cannot get erect because he’s thinking of lots of manly problems.

Read her full story below:

Oyindamola Alexander, who is a graduate of the University of Ado Ekiti (UNAD) has taken to her instagram page took to social media to claim that Actress Caroline Danjuma relieved her of her duties after she contracted the novel coronavirus from her son.

Oyindamola said her ordeal started after the Caronline’s 11-year-old son returned from the United Kingdom, a high risk country and started showing symptoms of COVID-19.

My page was created some years back.
Little did I know that life is going to throw an experience of gross injustice and dehumanization on my lap through a woman I would work for.
I have been badly treated but this particular one breaks me.
I think I am strong but my choosing not to speak up is dragging me into depression.
I have been one person that advocates for people speaking up to heal.
And for once I decide to state my plight and be heard.
I did not only have to deal with covid19.
I have also been going through intense level of frustration from my boss. Who did not only sack me on my sick bed even though I got the virus from her son who she flew in from london prior to the lockdown.but going all out to intimidate me with false accusations and lies. I was ordered by relatives to not even mention I had covid19 not more of staying my struggles especially the I’ll treatment for my boss.
I am trying to hang on and pray I get justice and an end comes to this oppression

So even though I was depressed and almost suicidal after dealing with covid19 and also the maltreatment from Caroline danjuma.

I was ready to settle for peace sake until she has been threatening me even after being discharged from isolation. Saying her son never had covid19 is the height of oppression and dehumanization on anyone. Knowing fully well I was exposed to her son who tested positive first. And the ncdc insisted we come for test. I will drop all my screenshot starting from while she was in isolation.

This is someone who I accepted to work with as a domestic staff because she promised to employ me in her company after seeing my resume and my potentials.

But instead did all she could to relegate me and intimidate me to feel like a nobody while in her house.
I won’t choose to fall into depression rather I will speak until I’m heard. 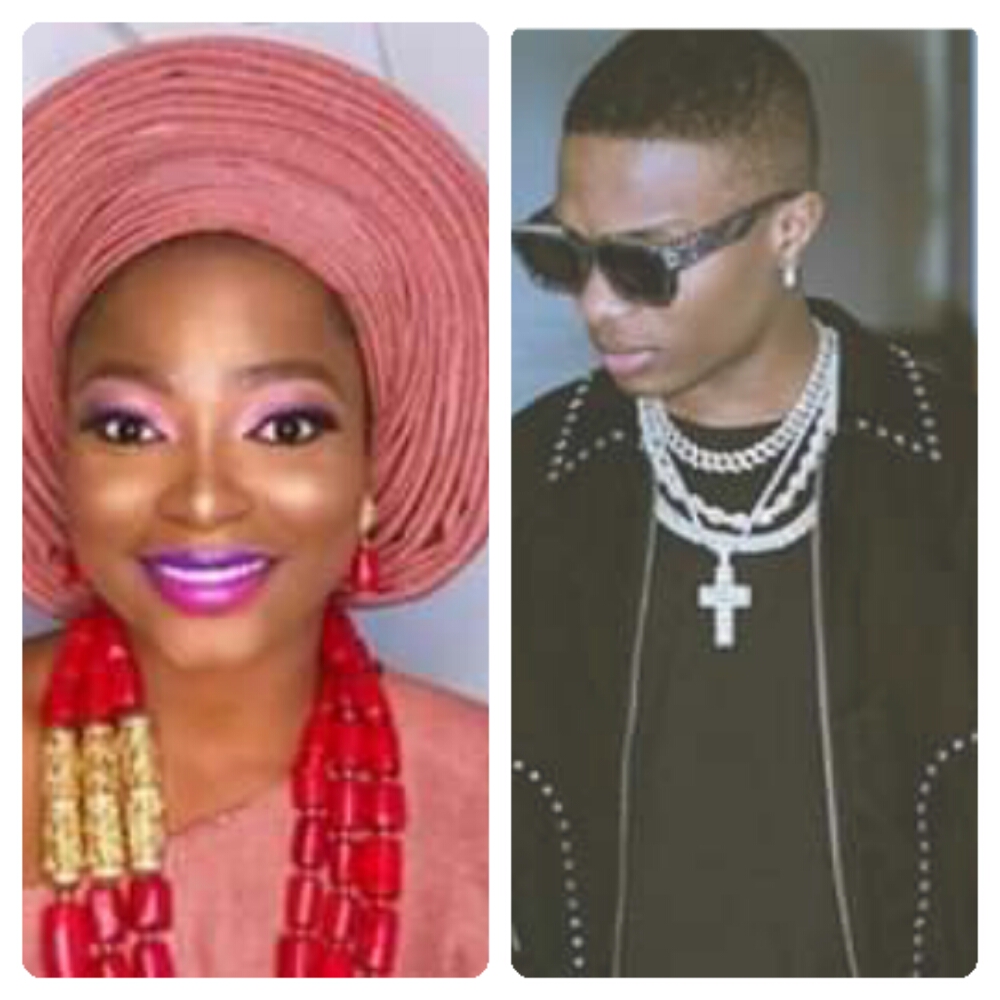 A nigerian lady on twitter has revealed to her followers that she is obsessed with star singer, Wizkid and he is the only man she can spread her legs for.

Wizkid to me is the greatest personality on earth right now! He’s the only man I can willingly spread those legs for”, she said

See her tweets below: 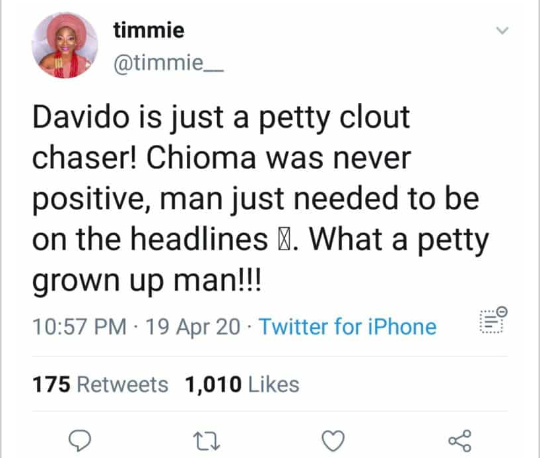 Recall that davido initially revealed that Chioma was infected with Covid-19, then he tweeted yesterday night about her recovery. READ IT HERE