Olosho Money Won't Go Far Or Do You Any Meaningful Thing, Ladies It Time To Level Up" - Actress, Sonia Ogiri Writes As She Advises Ladies In A Lengthy Post

"It's A New Dawn" - Reality Tv Star, Chomzy Writes As She Bags Ambassadorial Deal With A Skin Care Brand

" With All Due Respect Sir, Na You Dey M@d"- Reactions As Reality TV Star, Kess Insu1ts His Fellow Housemates And BBnaija Fans

"I Nor Send Una Mama Or Papa...."- Ayra Starr Replies Those Criticizing Her Skimpy Outfit To A Concert (VIDEOS)

"She nor even sh@ve, most cl@ssless winner ever"- Phyna dr@gged over outfit to club party in SA (Video/Photos)

"Show Me A Finer Couple" - Frederick Leonard Says As He Shares Throwback Video Of Date Night With His Wife, Peggy In London (Video)

"They Are Never Satisfied Just Like That Myzvinah She Keeps Going To Add It" - Reactions To Trending Video And Photo Of Actress, Nancy Isime B@ckside

"You Are One Of The Pillars That Stood To Make Me What I Am Today" - Reality Tv Star, Saga Pens Down Heartwarming Note To His Elder Sister As She Celebrate Her Birthday

"Your Attitude In The House Was St!nking &...."- Actress Uche Ebere Reacts To Beauty Tukura's Statement "N100m Is A Chicken Change"

"My Networth Is Almost A Billion, Yet I Don't Own A Car"- Maria Chike Brags

"This One That Was Shouting For Ordinary Boy......" - Reactions As Beauty Tukura Reveals She Can't Be Found Shouting For N100m, It's A Chicken Change (Video)

"Run From A Man That Uses Filters And Always Wants To Borrow Money" Actress, Sonia Ogiri Highlight As She Advises Women

"If You’re Paying Your Own Bills In A Relationship, Sign Out From It" - Socialite Bobrisky Offers Advice To Women (Video) 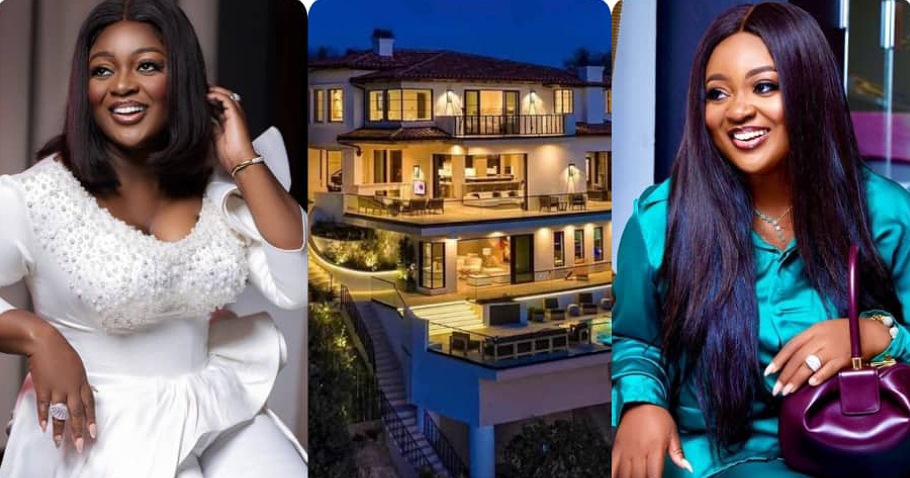 Canadian-born Ghanaian actress and movie producer, Jackie Appiah has stirred a lot of reactions online following the news of her latest achievement. It was reported that the actress bought a mansion in Accra, Ghana.

However, the interiors of the mansion were revealed by her colleague, Luchy Donalds who was taking a tour of the house.

The 38-year-old mother of one was born on the 5th of December 1983 in Toronto, Canada. She is the last of five children. She spent her early childhood in Canada before moving to Ghana with her mother when she was only 10 years. She is popularly known by her maiden name, Appiah.

Watch the VIDEO of Jackie Appiah mansion below:

She got married to Peter Agyemang in 2005 and they have a son, Damien Agyemang together. Her father Kwabena Appiah is the younger brother of the late Joe Appiah, who was a famous lawyer in Kumasi when he was alive. Her father currently resides in Toronto, Canada.

Jackie Appiah’s appearance on screen became regular when she was invited by Edward Seddoh Jr, writer of Things We Do For Love, where she played the role of “Enyonam Blagogee” after which she took part in many other movies like Tentacles, Games People Play, Sun-city and many other TV series.

Appiah was very shy the first time she went on set: “It was for a Venus Film Production titled “Divine Love” and where she played the role of Kate, the protagonist. she remembered fumbling a lot on stage however, many people didn’t notice and despite her nervousness, she successfully impressed everyone.

Appiah says her best role was in “Mummy’s Daughter” by Venus Films. The movie tells the story of the Bartels Family where she played the role of Princess, the daughter. “I loved how I acted and I was happy with the role I played”.

The Ghanaian actress recently added owing a mansion to her list of achievements as she bought herself a mansion recently. She was also generous enough to let her colleague Luchy Donalds tour the interior of her luxurious mansion in Accra, Ghana.

In the video, the tour began from the compound which showed off the actress’ cars and a large pool with lounge chairs and beautiful flowers.

Next, Luchy stepped into the large living room which was painted all white and had cushions and decorative pieces all over.

Jackie also has a small well-decorated home office, and her large bedroom, dazzling lights, and paintings that suit her taste she also had a Smart Toilet that opens on sensing motion, a large Pool, and Expensive Gadgets, etc.

See the photos below: 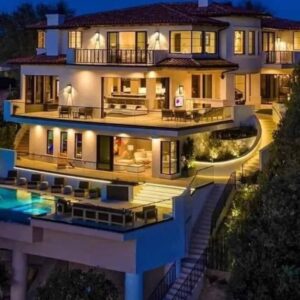 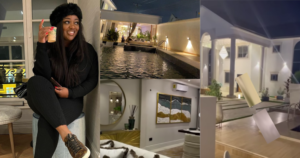