Rihanna's designer, Amina finally breaks silence after she was accused of having an affair with ASAP Rocky
Advertisement e9121cd44938c81b26ca3f8be26ae4dd

Rihanna’s designer, Amina Muaddi reacted after it was alleged that ASAP Rocky cheated on the pregnant singer with her.

It could be recalled that it had been claimed that Rihanna broke up with ASAP after alleged footage of him cheating with her designer Amina came to light.

Reacting to this via Instagram, Amina denied any suggestion she had conducted an affair with the rapper behind the pregnant singer’s back.

According to her, the couple is still very much together.

The shoe designer talked about how she initially assumed the fake gossip “would not be taken seriously”, but the past 24 hours had seen things escalate. She had to “speak up” and set the record straight on the “vile” fake gossip. 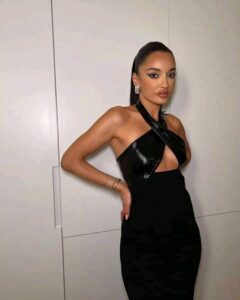 Amina Muaddi went on to explain how Rihanna’s pregnancy should be “one of the most beautiful and celebrated times” in her life and expressed her respect and admiration for the pregnant singer. 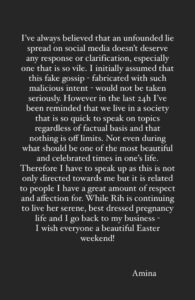 ALSO READ: “Thank you for all you are doing for our son” – Ubi Franklin celebrate third babymama, Siyo on her birthday (Photos)