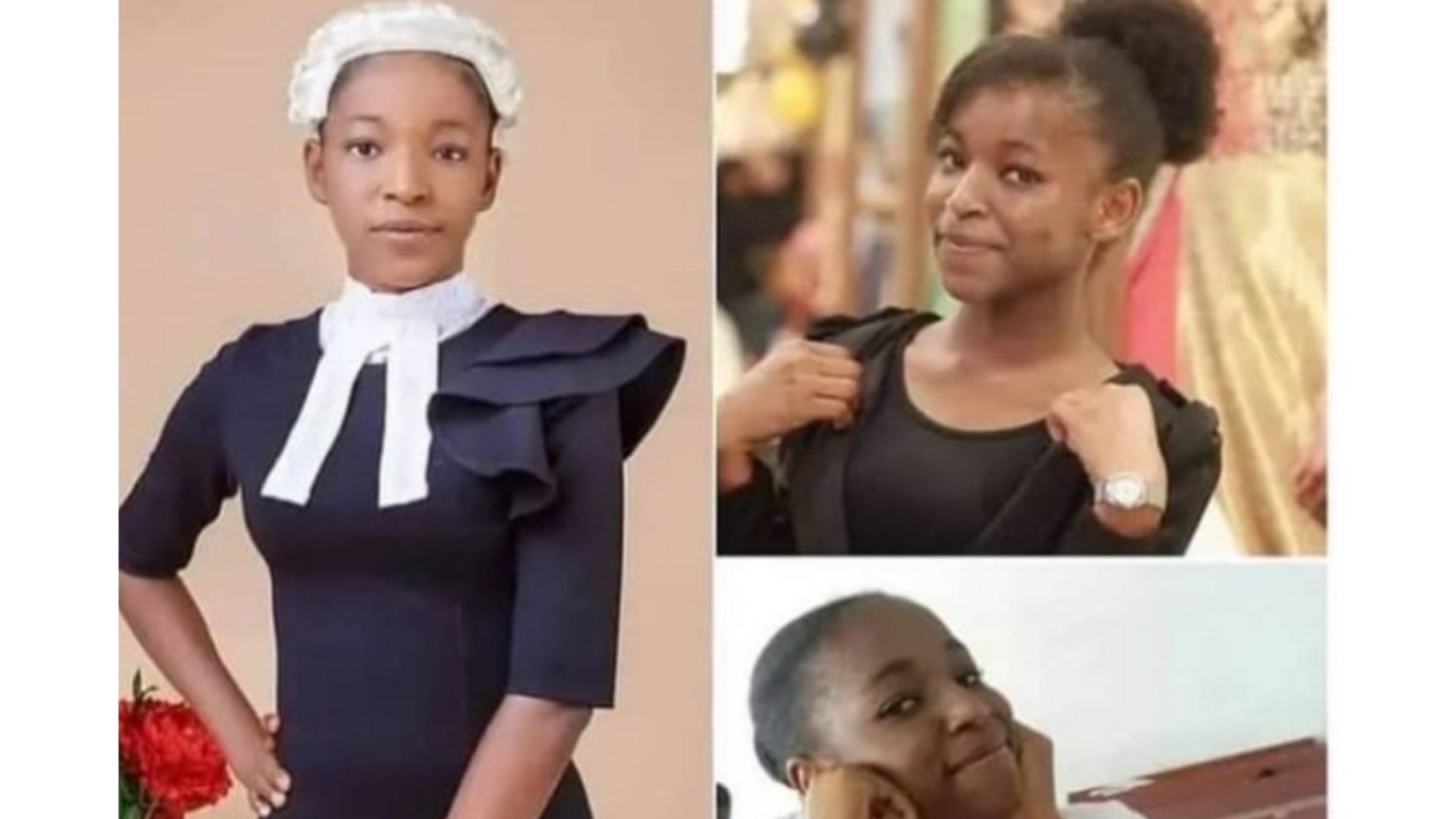 Esther Chukwuemeka is the youngest lawyer in Nigeria at the moment. At the age of 13, she got admission in a University in India to study law. 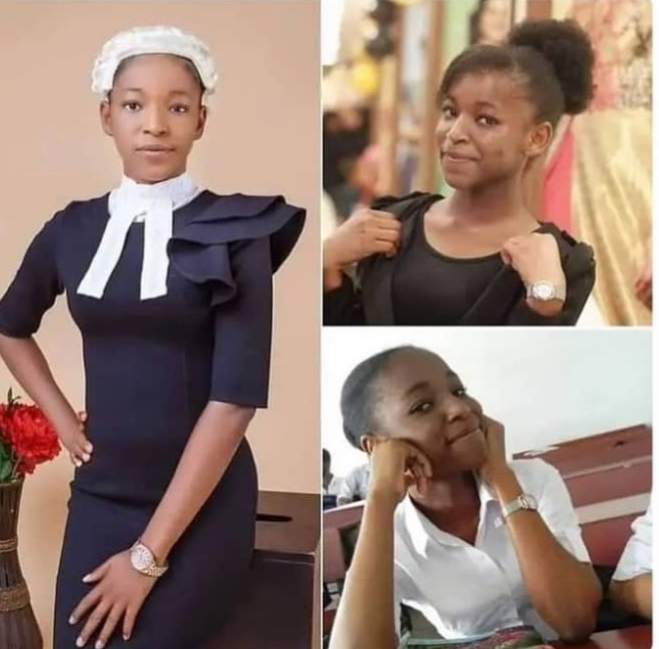 Lepacious Bose shared the news on her page. She wrote:

“All hail Barrister Esther Chukwuemeka, the Nigerian youngest Lawyer called to Bar today at the Young age of 20…. Yep you read that right 20 years old!!! If you are a lawyer and you attended Nigerian university then you know say na work she do!!!
In our generation when you add ASUU, NASU strikes plus students riots hmmm graduating at 25 sef was a testimony!!!
Well done Esther 👍🏾👍🏾👍🏾👍🏾

A brilliant Young Girl from Okigwe, She finished her secondary School at the Age of 13, passed her SSCE and got admission in ABSU, but the school denied her the admission citing that she’s underage.

Her father picked up the challenge and sent her to India to study law, she graduated in flying colours, then came back to Nigeria and studied at Nigerian Law School for her Bar Part 1 program which is compulsory for all students from foreign university.

Upon her Successful passing of Bar part one program, She wrote Bar Final exam and was among the Successful students.

She Is Being Called To Bar As Solicitor And Advocate Of Supreme Court Of Nigeria ..

Congratulation to the Nigeria’s youngest Barrister.” 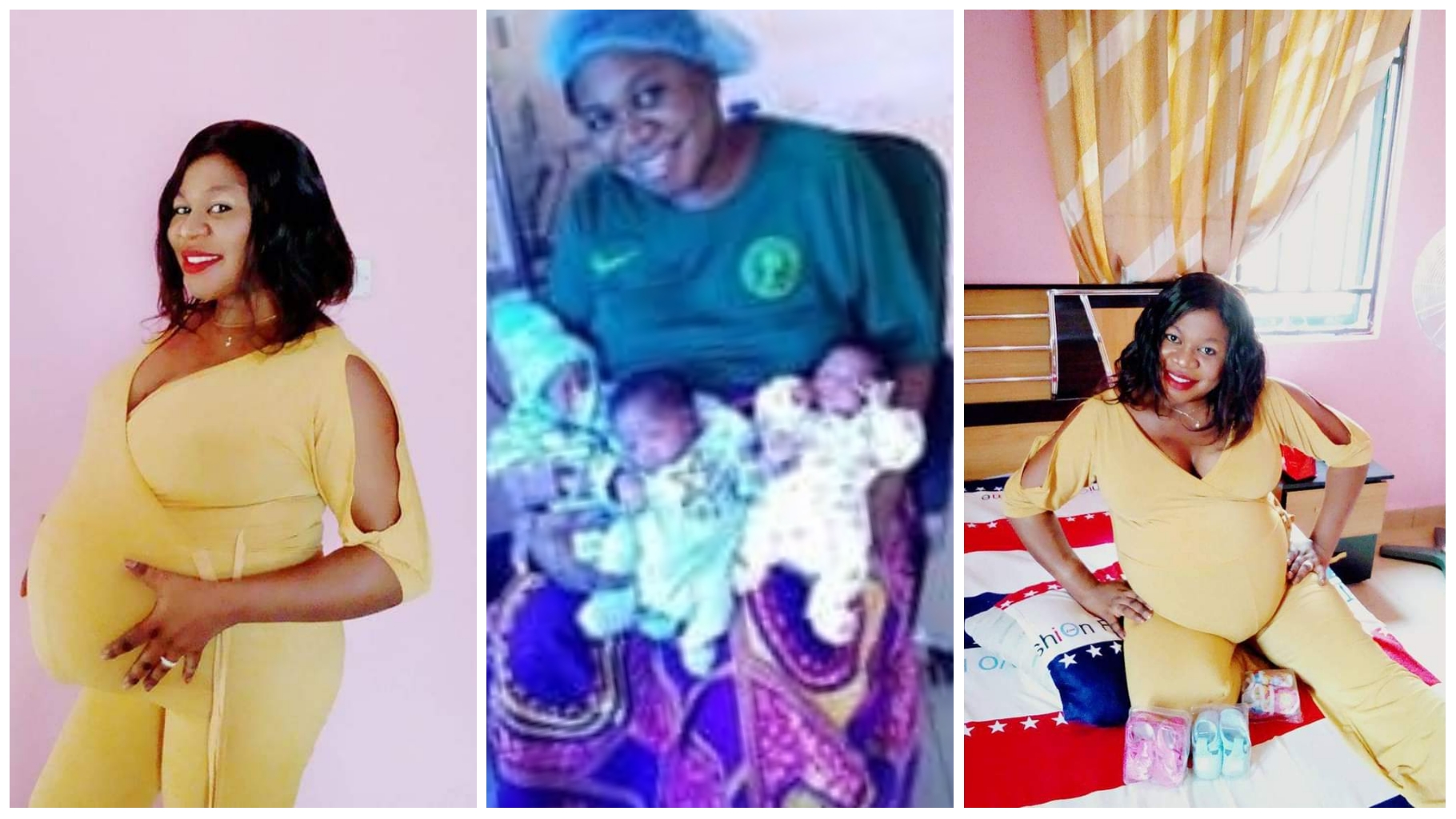 Happiness has finally set into the life of a Nigerian lady after she delivered a set of triplet. 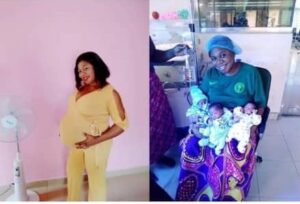 The woman who couldn’t keep the good news to herself took to her official facebook account to tell the world and to thank God for taking her out of ridicule. 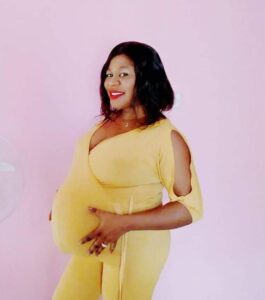 According to the lady whose facebook username is Helen Bello, her inability to conceive has earned her harsh names from people around. She stated that for years, she has had to endure insults from people who mocked her childlessness and finally God has made her an over comer. 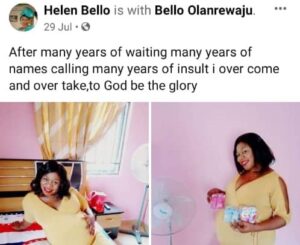 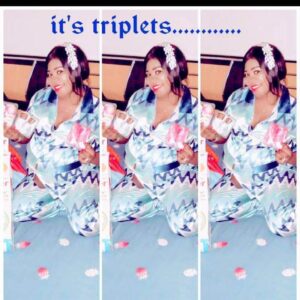 In another words, it’s been revealed that the new BBN housemate, Zainab Jumoke Adedoyin is the daughter of a former Commissioner of Kwara State. The new housemate is one out of the four children the ex commissioner gave birth to.

Read Also:Bbnaija Is Satanic & Should Be Shut Down- Ex-housemate Gifty Powers Cries Out, Gives Reasons 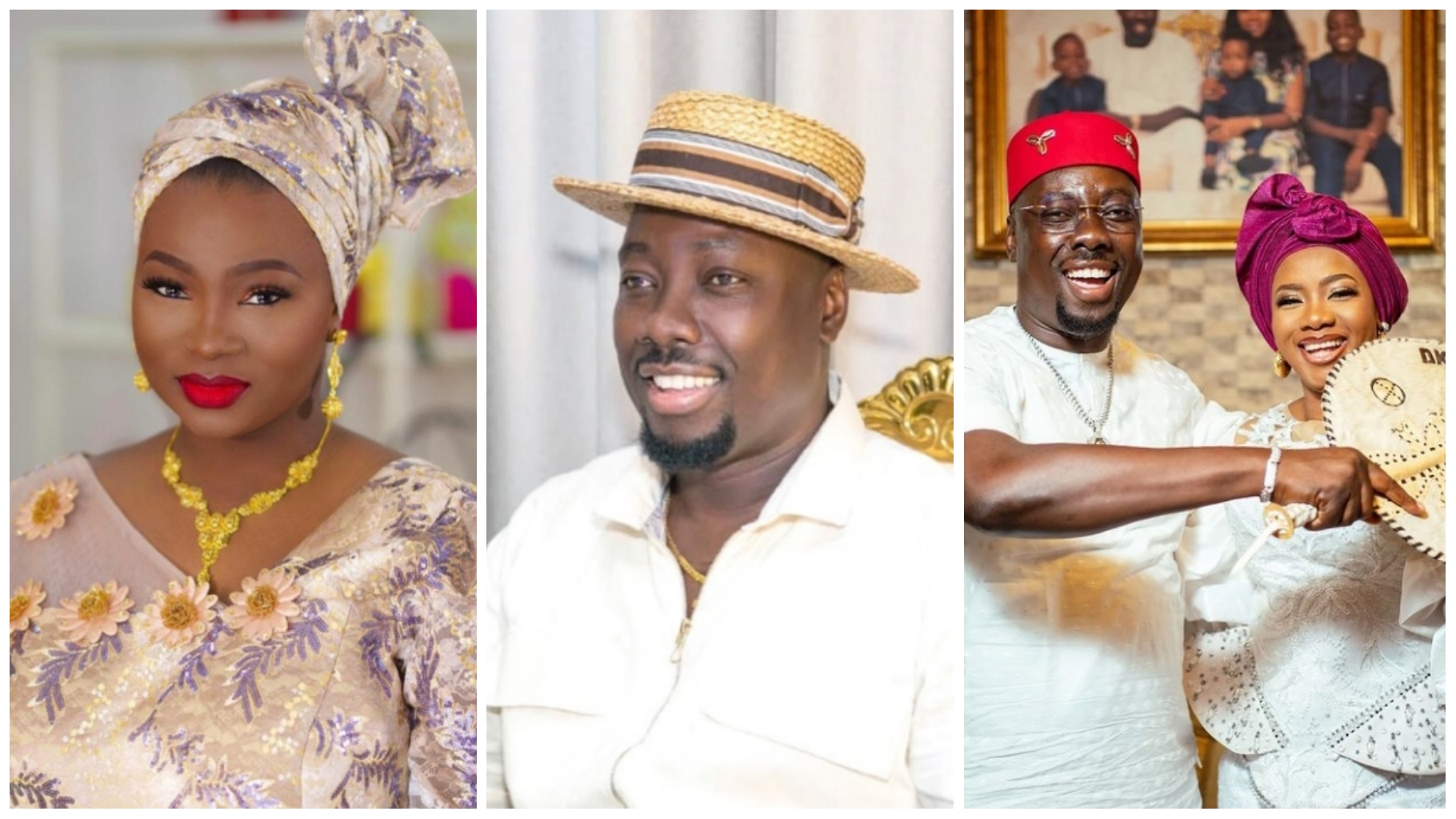 Popular sex therapist and Kayanmata (aphrodisiac) specialist, Jaruma has told ladies requesting for products to help make billionaire, Obi Cubana their Sugar daddy that her products cannot work on him.

In a video she shared on instagram, Jaruma advised ladies who are desperate to make Cubana their sugar daddy to first figure out a way to break his spiritual protection. 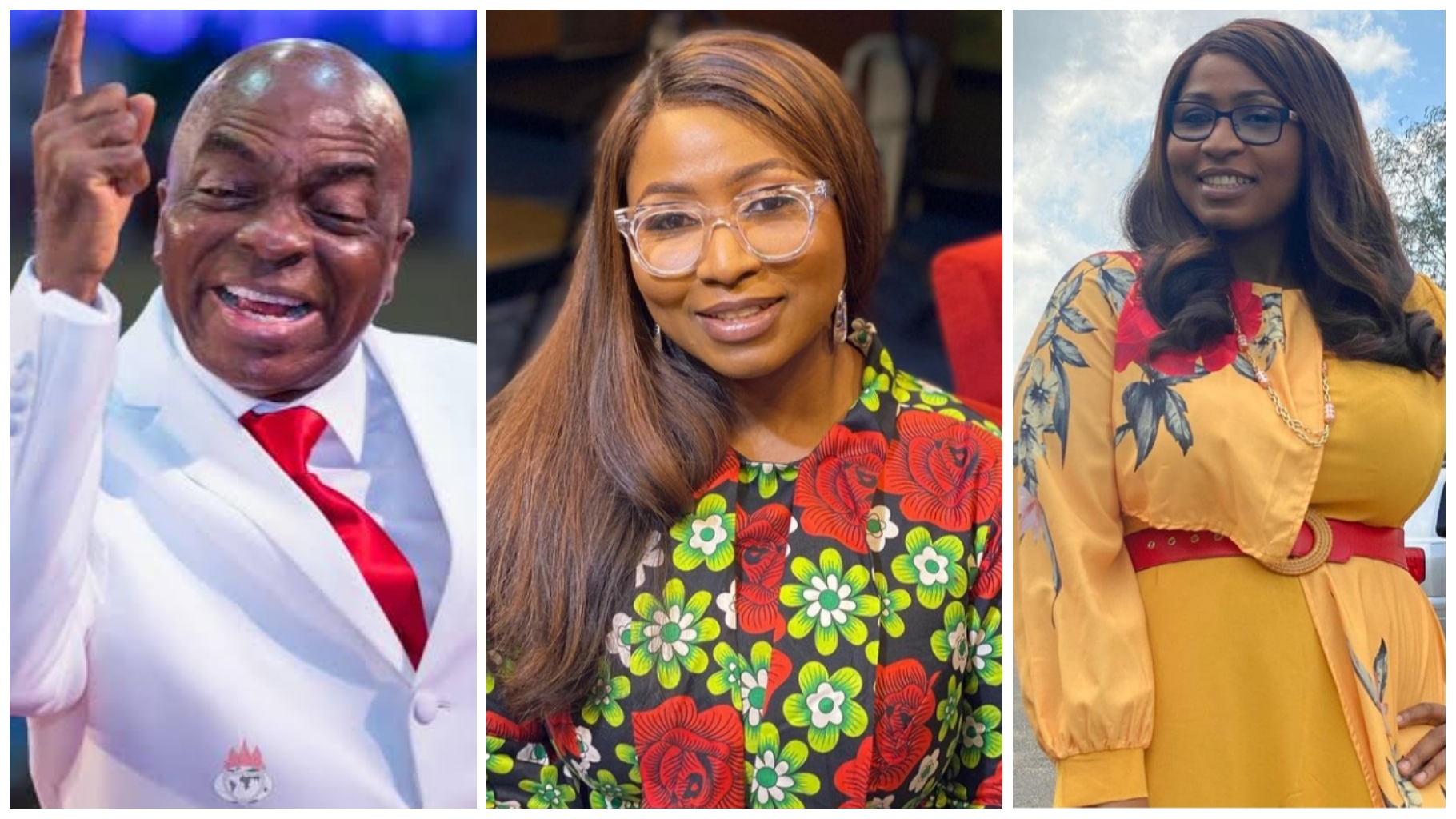 Yesterday, there was a viral news on the internet about a pastor in Living Faith Church (Winners chapel) who was sacked and also told to vacate the house church provided for him because he was generating low income. 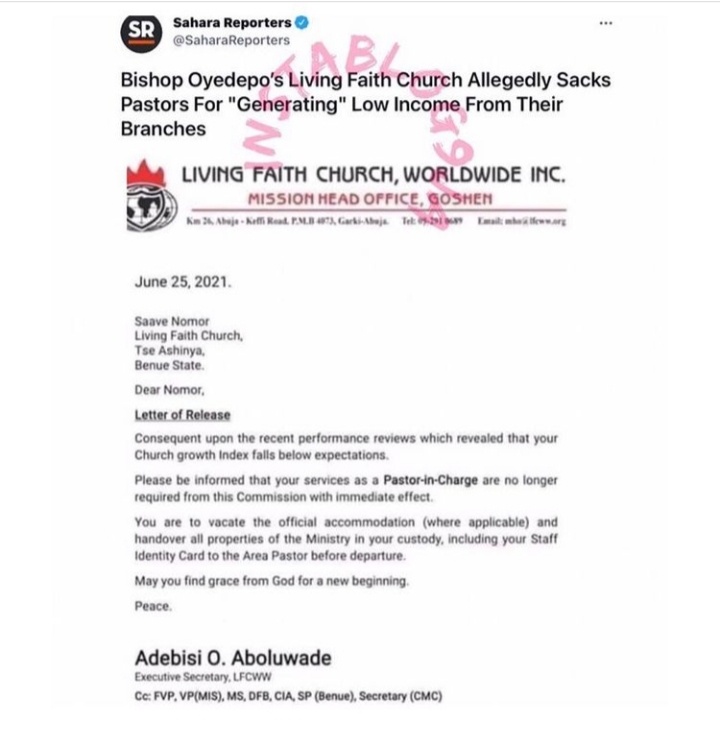 Reacting to this, Morayo Brown slammed the sacked pastor for coming to social media to rant. She advised him to talk to God who is the real manager of every bible believing church. 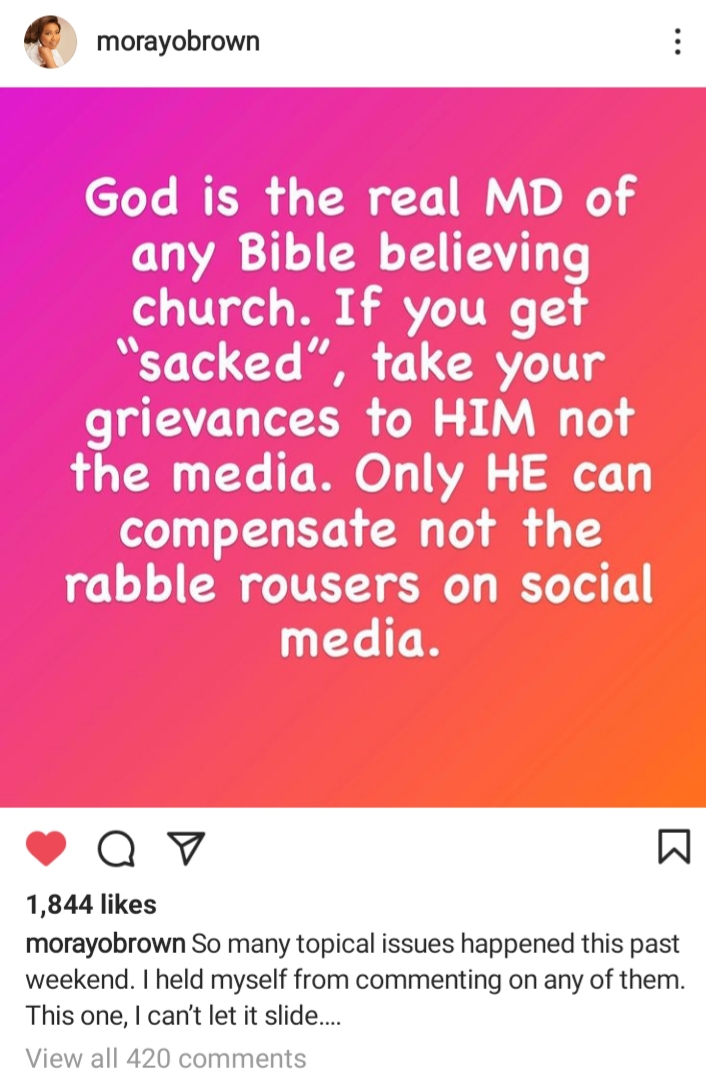 However, most of her followers disagreed with her. Read few comments below:

@fumzy4eva @morayobrown you are also doing the same thing the pastor did. If you feel coming on social media to vent his grieviances is bad you too why condem his action on social media. Get his phone number and talk to him then you would have gotten the whole scenerio and not be a judge too. Let God be the ultimate judge.

@jmapelle_em But he is human, the church should be a place of succour. Asking him to vacate his premises is demoralising. In Benue, civil servants are hardly paid and farmlands are sacked. These are two basic earning points for inhabitants over there. Should our actions as a church lead people away or keep people in? How do you even sack a pastor if it’s not an immoral act but income generation? Is church now business?

@awofe34 Me and you sha know that God is not registered on the CAC documentation of Bible believing churches. I pity the pastor because if he had taken a secular job jejely, at least he can apply to another company and get a chance but now is he going to apply to RCCG or Christ Embassy or Synagogue?