“When You Were Toasting That Babe, You Didnt Know” - Bbnaija Diana Gives Giddyfia An Epic Response After He Revealed She Made Him Cry » MoMedia

“When You Were Toasting That Babe, You Didnt Know” - Bbnaija Diana Gives Giddyfia An Epic Response After He Revealed She Made Him Cry
Advertisement e9121cd44938c81b26ca3f8be26ae4dd

BBnaija Level Up Housemate, Diana has given Giddyfia an epic response after he tried to apologise for the second time.

It could be recalled that on Tuesday, August 2, the duo had a bit of misunderstanding, over what Giddyfia said about Diana.

Giddyfia had told fellow Housemates that Diana is his type of woman and probably her crush in Biggie’s House. He also said many other things about the reality star.

Diana, who had once told Giddy that she took him as her younger brother in Biggie’s House, wasn’t happy when she got the information about them and this led to her putting up some attitude against him.

Giddyfia who felt guilty for gossiping behind her back, approached Diana later on while she was sitting in the lounge, to ask for forgiveness.

However, Diana was still pissed and didn’t give Giddy the audience to completely express himself.

“I want you to know from the bottom of my heart that I will never do anything to hurt you,” Giddy told Diana and she responded saying, “Keep your saliva for the task tomorrow”.

Hurt by her response, Giddyfia bent down over the couch like he wanted to shed tears.

He later left the lounge feeling moody and unsatisfied with Diana’s response.

Not giving up, Giddy approached Diana once more . 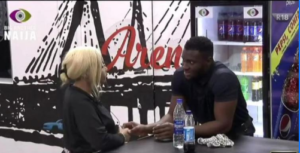 “I always want to come to your Bedside and look at you but I Know you were mad at me and You didn’t want to talk to Me, Sleep Was Very Hard Last Night. I was even Crying, i’ve  just been holding my Self.” He told her.

In response, Diana who is was still angry with him, replied; “When you were toasting that Babe, You didnt Know You Will Cry😲🫣😬😂”

ALSO READ: “I Became A Slave To Money As My Net Worth Increased” – Todd Chrisley Details How

“The Person You Want Didn’t Want You. Simple” – Reactions As Illebaye Speaks About Cruise & Not Being Attracted To Anyone