Taking to his Inst story, the reality star stated that some officers are always misbehaving and not aware of the reason they are in the force.

He went on to state that one day, he will slap a police officer in Lagos.

According to him, he simply needs one officer to teach a lesson that could serve as a warning to others. 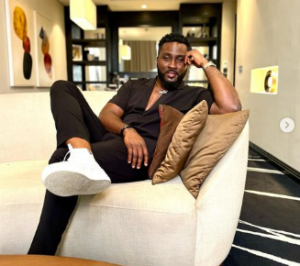 “One day I go slap mopol/police for this Lagos. Dem just dey misbehave. Just one I need to teach a lesson. Some if them don’t know why they are in the force.” He wrote.

Hours after he promised to slap a police/mopol officer, Pere left Nigeria.

Sharing a video via Instagram, the reality star announced that he has arrived in Dubai. 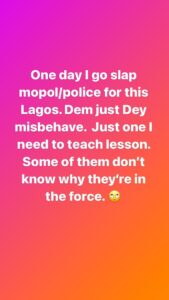 ALSO READ: “I Cook & Clean Everyday Yet They Nomimated Me, You Have No Reason To Be Upset”- Whitemoney Tells Queen (VIDEO)

“My knights” – BBnaija’s Nini grateful as she receives N1.5m, cakes and others from her fans and “Sanini” Shippers (Videos)