“Attractively Authoritative" BBNaija’s Doyin Gushes Over Cyph As She Reveals Why She K!ssed Him Uncontrollably » MoMedia

“Attractively Authoritative" BBNaija’s Doyin Gushes Over Cyph As She Reveals Why She K!ssed Him Uncontrollably
Advertisement e9121cd44938c81b26ca3f8be26ae4dd

Recall that during the Saturday night party, Doyin and Cyph showed keen interest in each other as they french kissed intensely.

All through the party, the pair who could not get enough of each other clinched and clung to each other.

As soon as Big brother announced that the level 1 housemates return and shut the door, the 27-year-old made a shocking move to kiss and Cyph could not have objected. 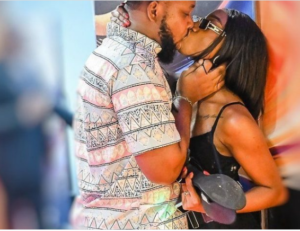 During a discussion with fellow housemate, Allysyn, Doyin revealed that she likes Cyph because of his “masculinity”.

“I just like Cyph because he has that boldness and courage. He is the kind of person that could just say, “you know what, come here baby, i wanna go.. attractively authoritative”.

ALSO READ: “I Will Show You That A Woman In The Kitchen Is Better Than A Woman With Curves” – Bbnaija’s Amaka Tell Pharmsavi As She Accuse Him Of Having Feeling For Modella