"Ronaldo Has Ru!ned His Legacy At The Manchester United..... This Should Be A Lesson To Others" - Daniel Regha Reveals, Gives Reasons

Cristiano Ronaldo's staff crashes his £1.7m Bugatti Veyron into a wall in Spain

"Life Is A Roller Coaster, It's All About Friendship, Honesty & Values"- Footballer Cristiano Ronaldo Says As He Clocks 37

"We Don't Condone V!olence"- Manchester United Reacts To Abuse Allegations Against Mason Greenwood By His Girlfriend

"We Rather D!e Than Lose To Super Eagles "- Captain Of Guinea Bissau National Team

Why I Rejected Move To Locomotiv Moscow – Odion Ighalo

I Didn’t Bribe My Way Back To Eagles – Ighalo

It could be recalled that after holding the Black Stars to a barren draw in Kumasi in the first leg of their playoff tie, the Super Eagles needed to win the second leg at home to seal their place at the 2022 World Cup in Qatar. 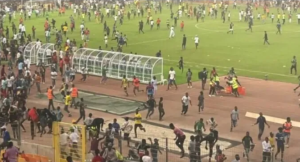 However, they could only squeeze out a 1-1 draw against their fierce rivals and this led to them being disqualified.

Angered by this, fans started throwing objects into the pitch before invading and destroying everything within sight.

As a result, the disciplinary arm of FIFA on Monday released a statement where the breaches committed by Nigeria and some other countries were highlighted and the punishments also spelt out.

In a dispatch by FIFA, the body’s Disciplinary Committee decried the poor organisation of the match for lack of order and security at the match. 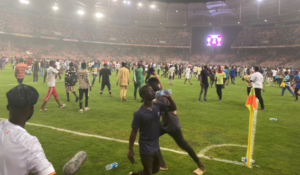 According to the committee, there was ‘failure to implement existing safety rules and failure to ensure that law and order are maintained in the stadium, invasion of the field of play and throwing of objects.

Apart from the 150,000 CHF fine, Nigeria will play its next home match without fans.

Related Topics:FeaturedFIFA World Cup
Up Next