Clarence House confirmed that the 71-year-old royal, Prince Charles had been diagnosed with the COVID-19 (coronavirus ) disease in a statement released this morning.

The heir to the throne is said to have displayed “mild symptoms” but “otherwise remains in good health”, and has been self-isolating in Scotland with the Duchess of Cornwall – who has tested negative for coronavirus.

The Prince of Wales has tested positive for coronavirus,” the statement said.

“He has been displaying mild symptoms but otherwise remains in good health and has been working from home throughout the last few days as usual.

“The Duchess of Cornwall has also been tested but does not have the virus. In accordance with government and medical advice, the Prince and the Duchess are now self-isolating at home in Scotland.

“The tests were carried out by the NHS in Aberdeenshire where they met the criteria required for testing.

“It is not possible to ascertain from whom the Prince caught the virus owing to the high number of engagements he carried out in his public role during recent weeks.”

Prince Charles’ last public event was a reception and dinner in aid of the Australian bushfire relief effort on 12 March, which took place at Mansion House in London.

Earlier that day the Prince of Wales had attended an investiture ceremony at Buckingham Palace, where he greeted recipients with a non-contact gesture due to concerns about the spread of the illness.

Rivers State On Lockdown, All Borders Closed Over Coronavirus

‘I am ready to save mankind’ – Pastor says as he demands $100,000 to fight Coronavirus demon in hell

A South African cleric, Pastor Mboro, has offered to go to hell and fight the demon responsible for the coronavirus pandemic.

According to Kenya Updates, Pastor Mboro has offered to embark on the dangerous journey and save mankind only for a sum of $100,000 (₦36,700,000) to cover his transport logistics.

“I am ready to save mankind,” Pastor Mboro said, “I have seen a vision of how the Coronavirus demon looks like and I will defeat it,”

The pastor also stated that there was no need to waste money on research as the real cause of the disease that has infected 640,589 people with 29,848 deaths is a demon in hell which he has volunteered to kill.

“There is no need for worry and expensive research, the real problem is the demon causing this disease and I am ready to kill it once and for all,” Pastor Mboro said.

The pastor gave an ultimatum saying the money should come no later than the second week in April. 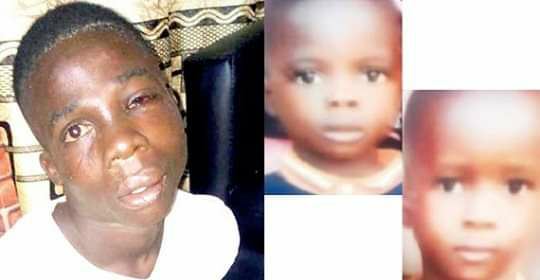 18-year-old Kelvin Uzor, has been arrested for the alleged killing of his brother’s identical twins for money-making ritual on March 6, 2020, in Oko Ogbele, Delta State.

The police revealed that Uzor killed the seven-year-old boys, then removed their penis, eyes, tongues and hands, which he allegedly hurriedly took to a native doctor in Anambra State.

Kelvin, however, has denied killing the twins, insisting that it was his friend one Onuwa Olisah, who killed them.

Kelvin said that his only crime was in attending the meeting with Onuwa and others, where they deliberated on how to carry out money making ritual. He claimed to have backed out of the devilish plan at the last minutes.

“My hope was to make money, drive big cars and build a house. I wanted to become a young chief because most of these young boys did not work as hard as I did and now they are millionaires. I’m a farmer and it requires hard work.

I was not even making enough money for myself. This was why I agreed to be part of the meeting. Onuwa convinced me that was the fastest way to become rich. He said that most of our colleagues made money through that means.

My greatest mistake was that I did not inform my family when Onuwa suggested that we should use the twins. I love those twins so much and their parents are nice.

When we were making arrangement who to use, Onuwa mentioned the twins, I cautioned him, but I didn’t know he would still go ahead with his plan. I have begged my brother to hold on until police arrest Onuwa for him to know that I had nothing to do with the murder of the twins.”

Since the kidnap and subsequent murder of the twins, Onuwa, who is a neighbour, has since disappeared into thin air.

READ MORE: JAMBITE DIES ON HER WAY TO WRITE THE EXAM  IN CALABAR

President Buhari has formally received the Minister of Health, Dr. Osagie Ehanire and the Director General of the Nigeria Centre for Disease Control, Chikwe Ihekweazu at the State house on Saturday, 28 March, 2020 for a briefing on the situation of the covid-19 “Coronavirus” currently in the country.

The President, some days ago, approved the immediate release of a 10 billion Naira grant to Lagos State, which remains the epicentre of the Covid-19 outbreak in Nigeria.

This grant will enable Lagos increase its capacity to control and contain the outbreak, while also supporting ot
her States with capacity-building.